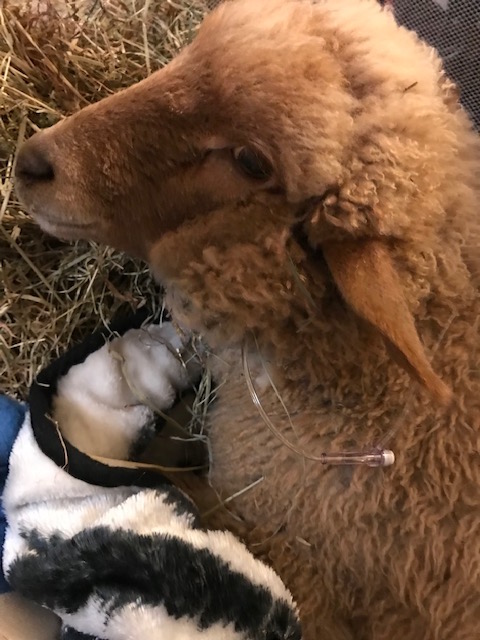 I haven’t had an animal give me a run-for-my-money like Christopher Robin since the Sainted Ozzie Osboar. As I type this my fluffy little man is in his playpen across the kitchen table from me hooked up to an IV and getting fluids. He had been doing incredibly well, was actually quite frisky after recovering from his bout with pneumonia and was zipping around the yard like a three-legged champ. Then, on Wednesday, he seemed a little lethargic, which, because he’s Christopher Robin, sent me into hyper-vigilant-hovering mode.

On Thursday I started him on antibiotics and B vitamins hoping to see a rebound on eating and drinking. On Friday morning, he had not peed or pooped. I was on the phone with the vet the second they opened, and David and I drove him up for a visit about an hour and a half later. His blood test results were abysmal – serious liver and kidney issues, and everything else was a mess, as well. The guess is that he ate something toxic, which seems far-fetched because his diet is so limited by his lack of mobility and constant supervision, but it’s all we had, and maybe there was something foreign in his hay . . . so, Christopher Robin is currently on supportive care, all we can do, while we wait and see if that incredible will of his carries him forward.

He shows no signs of quitting, that’s for sure. This morning I walked into the kitchen and he did his wiggle-thing until I squatted and gave him his morning scratch before injecting, inspecting and hooking him up to his IV fluids, all of which he endures with good cheer; I have never seen his equal, and that’s saying something around this farm.

Last night I was struggling to locate something to hang his IV bag from, and all I could find was a nail which holds a ceramic sign we’d hung about 15 years ago, shortly after we almost lost my horse, Captain, to an accident. The horse on the tile looks surprisingly like my Captain, and the words above him read, “Never give up.” Of course. It’s our farm motto, since really, there is absolutely no reason we should still be hanging on, aside from sheer will on the parts of the animals, David and I. So, as long as Christopher Robin is up for being on this crazy ride called life, we will be here right alongside him. And now . . . back to the main activity of this day . . . hovering over my handsome, red man . . .

5 thoughts on “All Glamour All The Time”