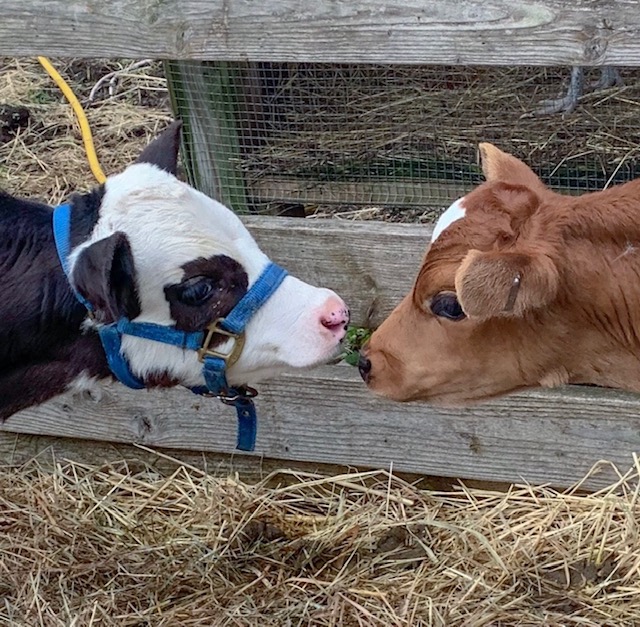 Sure. Why not. I will follow up yesterday’s blog with clarification for those not on my Facebook page and don’t know what inspired it. I was trying to be nice to my “attacker” because I don’t think there’s any point to starting a war when I have no spare minutes in any day . . . and I find no satisfaction in arguing with anyone but my husband . . . but . . . here goes! I will exchange this time allotment for either walking dogs or any personal hygiene . . . yesterday I gave up attempting a late lunch, which is actually fine for my waist-line, thank you hypothyroid . . .

“Why don’t you stop FUCKN dehorning these helpless animals you cruel piece of shit!!!!’” and “This place is no more than a glorified “petting zoo”.. so sad…”

And much, much more. Those are a few of the comments I was treated to, and the reason for yesterday’s blog. I didn’t get a chance to read the rest of the writer’s comments until this morning after chores, and they didn’t help change my opinion of extremist vegans or anyone else who adheres to intolerance of anyone with differing opinions.

Locket’s Meadow is a farm animal rescue and sanctuary. Like all other sanctuaries, we neuter, spay, vaccinate, and everything else our animals need. In order to treat them, we do what we must to keep everyone safe, humans and animals alike. A bull with horns can be deadly for handlers and other animals. A bull calf rescued from slaughter, if castrated and sometimes dehorned, then handled gently and often, is a pet, albeit a very large one. If our choice is to rescue bull calves, make them safe and give them a long, happy life, or do nothing and send them off to a grizzly death, we will choose castration and debudding. Then we will love them until they draw their last breath, hopefully many, many years from now.

First, I am vegan. Yes, I know, there is a group of vegans who will never acknowledge that what I do is veganism, but my entire life revolves around rescuing, caring for and loving animals. My husband and I make a lot of money, but we have no retirement, no savings, no vacations, no extras. We live in an ancient farmhouse with rotting joists and support beams, a hole in the bathroom floor, and plywood squares in place of tiles in the kitchen due to a 650-pound kitchen pig named Petunia Buttercup. We do this willingly, even gladly, for the honor of serving somewhere in the area of 140 plus animals, most of whom deserved far better than they were originally born into. I stopped eating meat nearly 37 years ago. I don’t remember when I stopped eating dairy and eggs, but it’s been a long time. I even owned a vegetarian restaurant for three years, Duck’s Soup, until it became clear I had to either give up either the restaurant or the farm animals or risk dying from exhaustion. I chose the animals.

And yet I am not a vegan, and in fact am a “cruel bitch.” I have to say, that’s not the first time I’ve been called names by those I refer to as “militant vegans” and it won’t be the last. And that’s OK. It doesn’t change my life or upset me, it changes nothing that I do in any way, and if you saw me with my “babies” you would understand; we have a connection that can’t be broken.

But here’s my point, which I tried to make in my previous blog but as always, the conversation disintegrated into arguing semantics: THOSE OF US PLAYING ON THE SAME TEAM NEED TO STOP ATTACKING EACH OTHER! Where is name-calling and judging each other doing anything to help these animals that we all love so much? It’s a terrible waste of time and energy that could be put to use actually ACCOMPLISHING something.

I have no issues with demonstrating, carrying signs, chanting, etc. I have done plenty of it for causes I believe in, specifically animal and human rights. I believe in free speech with a vengeance . . . I’m a journalist who has stirred up more than my fair share of controversy, for heaven’s sake. Picket! Demonstrate! Blog! Speak up! But . . . attacking our own soldiers working in the field? It’s not helping any animals and only adds to the suffering by dividing our ranks and wasting so . . . much . . . time . . . while everyone argues semantics online. And yes, the name calling . . . OMG. What’s the freakin’ point?

We have common ground. I know we do. For example, I believe everyone from the most extreme vegans to the small family farmers (who, while they do eat animals, give them a high quality of life and treat them respectfully while alive . . . agree with me or not, I don’t care, I won’t argue, I’m just proposing a possible HUGE coalition) know that factory farming is a true evil. It’s destroying our environment, polluting our food supply, depleting our water reserves and causes unbearable, endless suffering for billions of animals every single day. It’s responsible for the demise of countless family farms and the pollution of vast tracts of land and endless bodies of water. It’s enabled by billions of dollars spent by wealthy lobbies, with whom we can’t possibly compete . . .

What if we stopped attacking each other and worked together to solve the obvious problems? Think about the disjointed mess animal rescue has devolved into over a lack of tolerance for each other’s opinions and ideas. We are worse than Congress, and seem to get even less done, despite our passion.

So many years and so much awareness later, yet there are hens still confined in battery cages. Sows spend tortured lives in gestation and farrowing crates. Horses make the rounds of the livestock auctions, lining traders’ pockets and causing endless suffering before finally being sent to slaughter in Mexico and Canada. Can’t we all just pick one issue we agree on, agree to disagree about the rest, and then work together to actually save some lives, make a difference and probably save the planet while we’re at it? Then pick the next issue we agree on, and so on. If we run out of common ground issues to attack, well, then YAY! We can argue about all the rest of it AFTER WE ACTUALLY ACCOMPLISH SOMETHING!

Anyways, I am completely out of time, with pills to crush and buckets to fill, but . . . for those who only caught bits and pieces, I’m not trying to denigrate anyone, vegans or otherwise . . . I’m trying to make the point that unification is all we have to make a real difference for the suffering animals of our world. And name calling . . . wow . . . can’t we leave that to our politicians? While they’re totally distracted with treating each other like shit, think about what we can get done while they’re not paying attention . . .

And fair warning – I have chosen to disregard personal hygiene today in place of taking the time to write this blog. The animals won’t care, but the rest of you might . . .

May you all have a peaceful and love-filled day, filled with wild, amazing and progressive imaginings!

Kathleen Schurman is a journalist who is enslaved by a huge number of horses, steers, sheep, goats, dogs, cats . . . never mind, it’s too much to list . . . on Locket’s Meadow, a farm animal sanctuary that she shares with her much beleaguered husband, David. Say what you will, but she will have no more time to respond to nasty or even nice comments for the next 24 hours . . . but she look forward to catching up later!