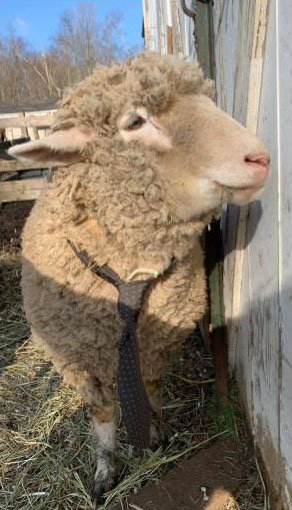 Day two of “trying to make money for the farm animal sanctuary when there is no longer a way to hold fundraisers because of the stupid Coronavirus” commences. We have a 9am appointment to make a guest appearance on the New Haven Register’s staff meeting this morning, featuring the animal of our choice, totally ripping off Sweet Farm in California. The owner, Anna Sweet, had a brilliant idea to offer rescued animals as live faces on videoconferences to break up meeting monotony in exchange for donations. There was an article in the NY Times about it, so, being total losers with no imaginations of our own, we jumped on their idea and decided there are hundreds of thousandsof conference calls every day, plenty of room in the field, let’s go for it! It’s brilliant, it’s super easy . . . we have lots of animals and an iPhone . . . piece of cake!!! We shall call it Zoom Animals and play on the word “zoo.” How cute! How easy!!!

We did a first trial run on Wednesday, which went without a hitch, featuring calves Francis, Valentine and Patrick performing to perfection. Today I decide to go with a different group. A really easy group. Really easy. Haha.

But first, to dress them up. Farm animals should wear appropriate attire for business meetings, and I had dressed Francis in a tie yesterday, which was a hit. But wow, they have BIG necks. So, I steal a bunch of my husband’s outdated ties and start cutting and hand stitching them together to make them longer. I have 45 minutes before the meeting. I meant to have an hour, but a dog had a major accident on the dining room floor and since there are no paper towels left in the entire world, I had to improvise. It was vile. Then, every single bird in the bird room had pooped in their water dish, so every single dish had to be changed out. All glamour, all the time . . .

So, I finally get to the stitching part, which is not as easy as you’d think because first I have to get the thread though the damned needle and my 59-year old eyes no longer cooperate. This, of course, is my punishment for teasing my grandmother and godmother in my youth when they needed their needles threaded . . . will I ever learn that everything comes back to haunt me? Anyways, by the time that’s done, I have 30 minutes left. I should be able to go outside, put ties on a calf and a sheep and have a few minutes to spare to get on the call, right? Right????

I head out to the paddock and gently place one pre-tied tie around my sheep Viktor’s neck. He’s thrilled. He thinks he’s got his collar on and he’s going for a walk. Piece of cake! Then I slip a tie on Prospero. Hmmm. Tail is too long – I double it up around his neck. It will do for video. Cool! I snap a cute shot of Viktor and make a fuss over him in his dapper attire.

But . . . no no no! Prospero is unhappy that Viktor is getting attention and he gets between us and starts dancing . . . me me me!!!! I pet him and tell him he will get his screen time, but he has to share.

Prospero does not want to share. He continues to dance and make a scene, which will not work for a sedate videoconference. I decide I will remove Viktor from the paddock and just use him. Prospero will have to wait to make his conference debut.

I let Viktor out onto the lawn and somehow he manages to get his tie caught over his nose and he flips out. I end up rolling in the wet grass with him, trying to get him untangled. We are finally under control, tie in place, except now Viktor decides he’s going for that walk and he trots down the driveway towards the road, me running after him. He has no collar on, just a tie, so I finally catch him by the tie, which had been perfectly tied and adjusted, and haul him back to the barn.

I decide we will stage this in a stall in the barn. 10 minutes left.

I can do this, right?

I put Viktor in a stall and give him some hay, but Viktor only wants to go for a walk. He tries to make another break for it before I can even get the stall door shut. I am again wrestling with a sheep in the cement aisle, finally getting hold of his tie and getting him back into the stall. He is not only pissed, he is no longer presentable. His tie is trashed. I remove it and put it around my neck to retie it for him. 8 minutes to go. And I have forgotten how to tie a tie. One try. Two tries. Three tries. I have been tying ties for 40 years, since even before Annie Hall came out. WTH???? I finally manage to get it done and slip it back on him and try to adjust it. Viktor again thinks that means he’s going for his walk. OMG. He paces in the stall, doesn’t care about the pile of hay.

I give up. Close the doors at one end of the barn aisle, open the doors at the other end where there is a gate separating us from calves Prospero and Clarence. Prospero still has his tie on nice and neat. WHY NOT VIKTOR????? I drop hay by the gate where his buddies are and pray Viktor stays put. His tie looks . . . OK. Barely.

2 minutes. I start to try to connect online, but it’s not Zoom, it’s Microsoft Teams which has a long series of security stuff to cut through. I had hoped to be at this point 10 minutes ago . . .

Viktor walks to the other end of the barn.

I keep pressing buttons, enter security codes, but the others can’t see me. Nor hear me. Push more buttons.

Viktor walks back to me and starts eating hay near the calves just as the picture comes up. 9:03. He makes his cue and hits his mark with zero seconds left to go. I can’t figure out how to flip the picture so that it faces the sheep, so I end up lying on the cement floor holding the phone to face Viktor where I can still see it to make sure he’s in the frame. I am out of breath but we are “live” and my sheep is performing.

And I realize that there was no way I was going to get away with “borrowing” an idea from another sanctuary without being punished. Bruised knees from wrestling on cement, soaked jeans from wrestling on wet grass (it actually snowed this morning up here on the hill in Bethany,) and a pissy Prospero who didn’t get to be the star.

[It is at this point in writing this up that I remember I had brought my iPad out to use for the videoconference and I never got to use it and it’s still out in the paddock and I have to stop everything and run outside to rescue it from calves’ feet . . .)

However, I think I have to take a sheep for a walk instead . . .

Kathleen Schurman, and her husband, David, are owned by the animals of Locket’s Meadow Farm Animal Sanctuary in Bethany, CT. Should you, too, want to see if she can get her act together to have a rescued farm animal appear live at your videoconference, visit the Locket’s Meadow Facebook page where Zoom Animals will be posted as an event, hopefully by the end of today (Thursday, April 16) if Kathleen is not distracted by too many other “happenings.” Zoom Animals should also be posted on the website by Friday, April 17. Same disclaimer. Just gotta walk a sheep first, and maybe get a cake into the oven . . .mmmmmmm . . .